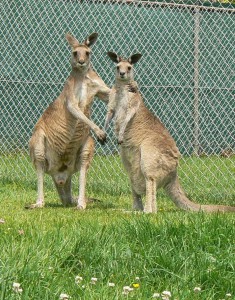 To the general opinion, the renowned British globetrotter James Cook discovered the kangaroo. But 140 years earlier it was the Dutch ship “Batavia”, under the command of the Antwerp Francisco Pelsaert, chief merchant at the East India Company, in India. The Dutch captain Francico Pelsaert discovered in 1629 along the west coast the middle sized Dama Wallaby (Wallabia Eugenii). He noticed that there was a puny little young in the pouch of the mother to the nipple, and he assumed that the young had been grown from the nipple. About this description no one has really excited and they forgot about it soon. The ship sank west of Australia when it ran aground on the reef of the Morning Houtman Rocks Australia. The ship broke into pieces. Many crew member did not survive the journey.

In 1770 James Cook sent his crew to the Australian coast to shoot pigeons for the sick people on board. It was about the place where the said town to Cook Cookstown lies. When the crew returned, they told us that they had seen an animal that was as big as a greyhound, mouse grey and fast jumping. A few days later saw Cook these animals myself. Again a few weeks later, the naturalist Joseph Banks with four companions went ashore to make an excursion. Cook writes: “After a march of many miles they discovered four similar animals, of which two were chased by Greyhound of Banks. The animals escaped by leaps and bounds in the thick, tall grass to disappear. These creatures do not walk according to Banks on four legs, but jumping like a jumping mouse on the hind legs quickly forward”. 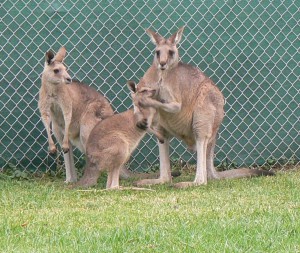 The kangaroo got its name from a confusion of tongues. In an attempt by the Aborigines (these are the original inhabitants of Australia) to inquire how these creatures were called. The Aborigines gave the answer “kangaroo” meaning “I do not understand you”. To this vague information, which gave the natives about the animals, he named the animal kangaroo.

These rare animals beards to be a great sensation, because they looked very different in those days to other already known animals. Three years later, after the English fleet a cargo of captives in Port Jackson (Sydney is the place where now) had delivered a live kangaroo was taken away as a gift to King George III of England.

This remarkable animal stirred much commotion, so soon there where brought several kangaroos to England. 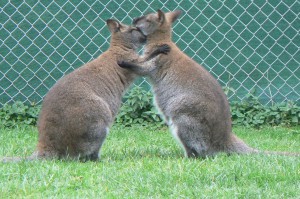 When talking about kangaroos, we think first of the big, Red or Grey animals that are almost as large as a man with their powerful body and large hind legs, small front legs, narrow chest and a small cup. Kangaroos include a large group of animals, which live only in Australia, Tasmania, New Guinea, the Islands of Bismarck Archipelago (put there by man) and in New Zealand. However, the group kangaroos includes 17 genera and 52 species with a plurality of sub-species. The smaller species are called Wallaby. 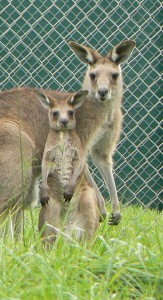