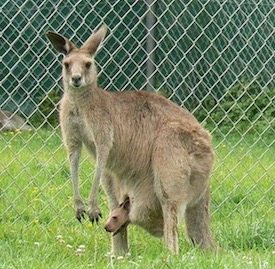 Sincere concern about the survival of many kangaroo and wallaby species

Kangaroos were discovered by the British world traveller James Cook in 1770. Three years later he brought the first living kangaroo with him along to Great Britain as a gift for King George III. More animals followed to Europe.

The animals are known for hundreds of years outside of Australia and have proved that they are well able to maintain and procreate themselves on the European continent. The Marsupials (non-placenta mammal) are the most special mammals on Earth. A special reason to take care for these beautiful animals and provide them for a possible destruction. Because a lot off treatment in Australia is not very respectful with this unique animals. Therefor is it very important that especially countries outside Australia take responsibility. A great number of our (in Western Europe present) species are under pressure of die in Australia.

Also the science in Australia about these species is sometimes behind knowledge of lovers in Europe. For example the recent experiment of biologists in the Wilsons Promontory National Park in Australia. They published on 1 July 2011 on the news website Live Science that they discovered that a joey in the pouch of a female kangaroo not always her own young has to be. A finding which was already publicised in the association sheet of hobbyists in 2009 in the Netherlands. 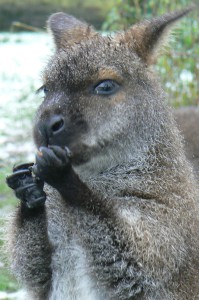 Facts about kangaroos in Australia

Every year, millions of kangaroos are killed in what is considered the world’s largest slaughter of wild animals! Many movies in which these shocking acts are displayed, as are so poignant that they are blocked at YouTube with an age lock.

Every year, because of the kangaroo industry, millions of animals are murdered, for their meat for human consumption or for pet foods and for their skins, including footwear.

The joey’s from the butchered kangaroo mothers are shot, clubbed, decapitated, kicked to death or simply left to die a slow death there.

The older young kangaroos, who managed to escape, die of hunger, stress and cold. Joey ‘are, after they leave the pouch for the first time, for a long time, on average a year, depending on milk. Hundreds of thousands of Joey’s die in this way each year in Australia for the benefit of the kangaroo industry. 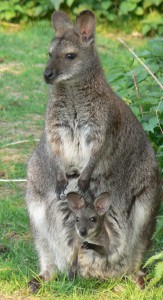 Kangaroos are not in plague as many want us to believe, but life in most of Australia on a critical density of less than 3 to 5 animals per square kilometre. Since 2001, the number decreased by 65% to 80%. The massacre is 2 to 3 times as fast as the animals can reproduce. In total there are now 10 species of kangaroos as a result of this cruel trade deserted(!!!) and is further a multitude of species threatened with extinction. 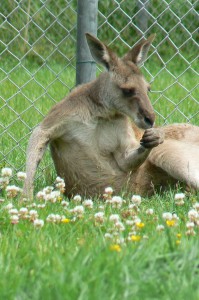 Kangaroos are not bred for the industry, but in the wild at night hunted and butchered without any supervision of veterinarians and animal welfare authorities. Kangaroos are not killed to protect the agriculture or because of impending overpopulation, they are mercilessly slaughtered the millions of profit yield. 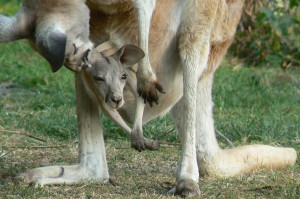 Kangaroos multiply only one young per year, 60 to 80% of them die before they reach the adulthood. The gruesome hunting by people helps ensure that the average age of wild kangaroos is 5 years in captivity they can reach an age of 28 years. 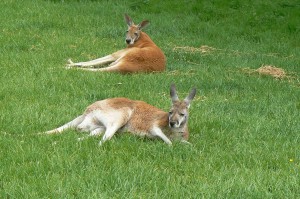 Among others RSPCA Australia (animal welfare organization) has expressed their concern in the 2002 annual report on the fate of the kangaroos and joey’s that are killed for the industry. However, even this does not help, the large-scale slaughter still continues.

In late 2009, Bob Irwin, the father of “Crocodile Hunter” Steve, made a striking call to his countrymen: “don’t export kangaroo meat, because those animals were exterminated in no time.” “Kangaroos plants themselves, contrary to what people think, but actually continued sluggish,” said Nikki Sutterby. She is coordinator at the Australia Society for Kangaroos. Her organization even calling for an international boycott of kangaroo meat, as also occurred with as seals. “Kangaroos often die a very painful death,” according Sutterby. “What many people do not know is that they are not bred and slaughtered like cattle. They are wild shot. The joey are often clubbed. “

On September 7, 2011 is also the World Wildlife Fund (WWF) again warned that more native species will become extinct if Australia is not going to protect its most iconic animals. “Since the arrival of Europeans, many of 57 kangaroo and wallaby species endangered,” says WWF-manager Michael Roache. “Current methods for protection are not sufficient.” The WWF has drafted an action plan for Threatened Australian kangaroo species, that plan must protect 21 species from extinction.

A few of the organizations within Australia who are concerned about the survival of kangaroos:

And a number of links to substantiate the above texts contains

Appointments made by organizations with the government are massively ignored and underfoot entered.

Concerns about the survival of many unique species and kangaroos particular, it is within Australia large.

That is why the Australian government for many decades ago prohibited the export of live native animals.

That means that even in the future never living marsupials will leave Australia.

People who want to keep these species and breeding are designated on animals that are bred for many decades been here long.

It’s not just our last chance, indeed it is our moral duty to the handful kangaroo species that we still have to manage very carefully.

It’s about the survival of this unique species.

Kangaroos and wallabies deserve our respect and full protection.

One based on fallacies keep driving ban does not fit there.